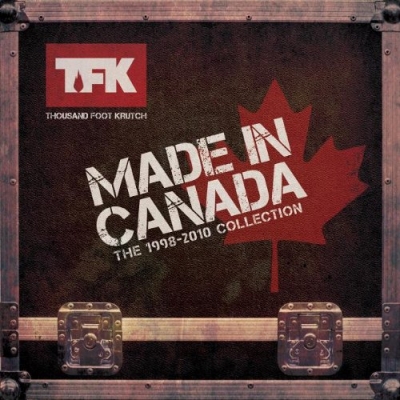 Thousand Foot Krutch will release its first hits compilation, 'Made In Canada: The 1998-2010 Collection', on 15th October 2013. The 14-track album includes two never before released tracks, 'Complicate You' and 'Searchlight'.

Following the breakout success of the band's current independently released, 2013 Dove Award nominated and No. 1 selling Billboard Hard Rock studio album, 'The End Is Where We Begin', the new collection underscores the past hits that helped build this band into one of today's most successful rock trios.

The compilation features fan favorites and No. 1 songs, such as 'Rawkfist', 'Move', 'Fire It Up', 'Phenomenon', 'Falls Apart', 'Bring Me To Life' and six more, plus the two new songs.

"These are both songs that we loved, but they didn't quite fit the body of the last two records," explains Thousand Foot Krutch frontman, Trevor McNevan.

"We thought it was only fitting to record them and include them in this compilation. They are NOT an indication of what the new studio album we are working on will sound like, or a window into what's next, but they’re new additions to the records we made during this time. They're both a step outside the box a little for TFK as well, so we thought it would be fun to share them!"

"'Complicate You' has more of a heavy funk feel to it, which we loved," says McNevan. "It's more of a fun, feel good song about meeting someone that completely catches you off guard (in a good way). It's about a guy/girl randomly meeting for the first time, and captures those same quirky feelings you get when that happens. I thought it was an honest and funny perspective on that."