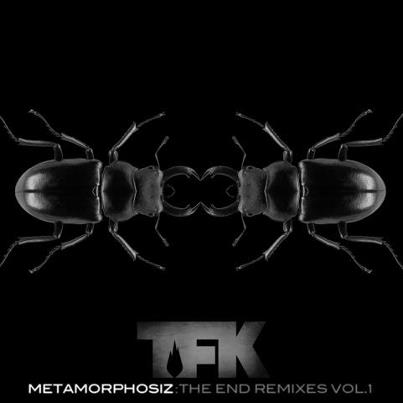 Get 'Metamorphosiz: The End Remixes Vol. 1'

Thousand Foot Krutch will release their first ever remix EP, titled 'Metamorphosiz: The End Remixes Vol. 1' on 4th December 2012. The five track EP features two remixes from acclaimed British DJ Andy Hunter, and revisits tracks from the Canadian rock band's seventh studio album 'The End Is Where We Begin', which hit No. 14 on the Billboard Top 200, their highest charting album to date.

The band made two remix songs available free for download last month, and following the response from fans have decided to put together an EP.

"You spoke, we listened. Because your response to the two free remixes was incredible, we've decided to make Metamorphosiz: The End Remixes, Vol. 1!" exclaims TFK front man Trevor McNevan.

Featured on the remix EP is Solomon Olds' (Family Force 5, Newsboys) take on the adrenaline-infused 'Light Up The Sky'. Also featured is the current hit radio single, 'War Of Change', remixed by Andy Hunter (The Matrix: Reloaded, The Italian Job, ABC's Alias), who further offers a 'tripped out' version of 'I Get Wicked' for the EP.

Robbie Bronnimann (Nicki Minaj, Chicane) remixes the Active Rock hit single 'Let The Sparks Fly', while Steve Sidelnyk (Madonna, No Doubt, Moby) and Rob Persaud (The Bourne Legacy, Snow White and the Huntsman, The Green Hornet) round out the 5-song EP with 'We Are (Karmageddon Remix)'.