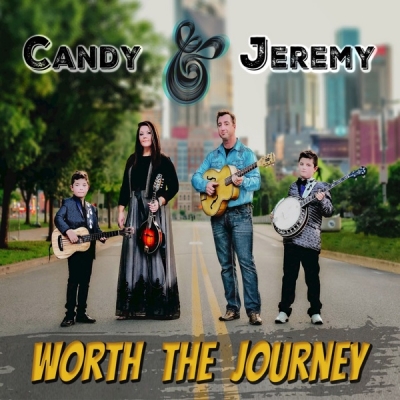 Get 'Worth the Journey'

Candy & Jeremy are a husband and wife acoustic duo from Nashville, Tennessee, and their roots run deep in Gospel music.

Candy is the daughter of Gospel music legend, Coleman Looper, a founding member of the Looper Trio, Coleman Looper & The Way Travelers (Morning Star Label) and the Coleman Looper Family. Candy's parents, Coleman & Marie Looper also owned & operated the popular music venue, the Grand Ole Gospel Barn in Crossville, Tennessee. This is where Candy would get her start in gospel music. “I can remember Candy as early as two years old on stage singing”, recalls candy's mother, Marie. The youngest of 6 children, Candy from birth was raised on the road with her family. By age eleven Candy joined in singing full time with the family group.


Jeremy joined the Coleman Looper Family in the spring of 1997, and in the fall Jeremy and Candy were married. “From the moment I met Candy we were inseparable,” states Jeremy “because we both shared the same love for God and gospel music.

Jeremy grew up around music and singing his entire life, his passion for playing music came at an early age by playing drums in his home church where his parents Terry and Kathie Bear pastored in Nashville, TN. Candy and Jeremy traveled across the country as part of the Coleman Looper Family for over twenty-three years. Making appearances at churches, Camp Meetings, concerts, festivals and tv programs such as: TBN Praise the Lord and many more. Fall of 2018 this chapter of their lives would come to a close when Coleman announced he was retiring after sixty-three years in music ministry.

Now embarking on a new journey Candy & Jeremy along with their two sons, Colter & Kayden, and band are determined to spread the good news of Jesus Christ through Word and song anywhere a door is open. After twelve years of marriage Candy and Jeremy would welcome their first born son, Colter and three years following Kayden would enter into the world. Colter now at age twelve is learning to play multiple instruments but his main passion is the banjo. Kayden, age ten, is learning to play acoustic bass on a customized cello and his dream is to one day play “that great big bass” as he calls, the Upright. Colter and Kayden made their recording debut on Candy & Jeremy’s album WORTH THE JOURNEY with the old time standard, "WORKING ON A BUIDING." These two definitely steal the show every time they walk on stage. Candy and Jeremy’s acoustic sound is made up of a great band who love the Lord and make it all come together like a well-oiled machine. Matt Vaughn from Monterey, TN is a multi-instrumentalist (dobro, mandolin & fiddle) and vocalist. “Matt is truly God sent to the group” states Jeremy, "we feel there is no one who can fit any better musically and vocally with us.” Zack Murphy of Sparta, TN is a minister and multi-instrumentalist (bass, guitar & dobro).

Their debut album "WORTH THE JOUNEY" was produced by award winning Ben Isaacs and engineered by the multi-award winning Mark Capps . “This project is full of great songs and wonderful performances of them.” states Ben “It was an honor to be part of it.” Soon after Candy & Jeremy were signed to MC1 Nashville’s Copper Lily Label and released their debut single “WORTH THE JOURNEY.” The song was released during the National Quartet Convention in September 2019. Jeremy penned the single WORTH THE JOURNEY, “God gave me a message and out of the message He gave me a song.” States Jeremy, “This song delivers a message that no matter what struggles life may bring our way, Jesus reminds us to keep pressing forward because Heaven is WORTH THE JOURNEY.” Following the National Quartet Convention, Candy and Jeremy performed six shows at Dollywood’s Harvest Festival in Pigeon Forge, TN. Their acoustic mountain sound was well received with standing room only during each show. In March 2020 to their surprise, Candy and Jeremy received the news that their debut single WORTH THE JOURNEY had been nominated for a DOVE Award by the Gospel Music Association for Bluegrass/Country/Roots Recorded Song Of The Year. Their second release, "THIS VALLEY" was written by lifelong friend and CEO of MC1 Nashville, Darlene Fowler would follow the same path. Climbing multiple charts as well as making it's way onto the Dove Awards ballet for Bluegrass/Country/Roots Recorded Song Of the Year in 2021.

Since their debut Candy & Jeremy's music has been well received and had great success on radio world-wide. They've also been featured in multiple publications such as, Singing News Magazine, Christian Voice Magazine, Cashbox Magazine and the cover of Cross Country USA Magazine. Their current single "STILL" has received airplay from around the world and charted to #1 on multiple stations. "STILL" is currently #13 in the Singing News Bluegrass chart for August 2022. For this success they thank their promoters, Les Butler of Butler Music Group & REAL Southern Gospel Radio and also Randall Wilds of Millennium Music Group.

Candy & Jeremy continue to travel across the country performing at churches, festivals, concert venues, fairs and theme parks. In 2021 they were invited to play at the Worlds Largest Christian Music Festival - 40 Days & Nights of Gospel Music at the Ark Encounter in Williamsburg, Kentucky. They will be making their second appearance at this great event on Thursday, September 8th 2022 at the Noah's Village Outdoor stage.

If you enjoy heartfelt acoustic gospel music, then you don't want to miss an opportunity to see Candy & Jeremy in person. Whether it be in song or the preached Word, this husband and wife duo have been called to spread the message of Jesus Christ to the hopeless and broken because they were once broken themselves. 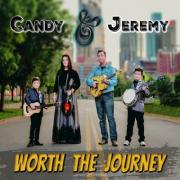