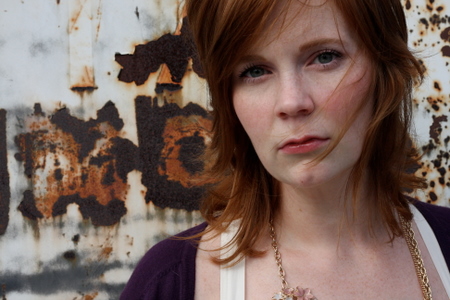 Singer/songwriter Kendall Payne has been around the music scene since 1999 when, aged 17, she landed a record deal with Capitol Records. Despite being dropped by the label she continued to release albums independently. But now Kendall tells LTTM that her new album 'Wounds to Scars' might be her last.

For people who don’t know who you are Kendall, tell us a bit about yourself?

I am a California native, got signed to a record deal at Capitol when I was 17. Traveled and toured with various artists (Third Day, Delirious, Nichole Nordeman, Lilith Fair) had a bunch of TV and Film...
Read More Singer/songwriter Kendall Payne has been around the music scene since 1999 when, aged 17, she landed a record deal with Capitol Records. Despite being dropped by the label she continued to release albums independently. But now Kendall tells LTTM that her new album 'Wounds to Scars' might be her last.

For people who don’t know who you are Kendall, tell us a bit about yourself?

I am a California native, got signed to a record deal at Capitol when I was 17. Traveled and toured with various artists (Third Day, Delirious, Nichole Nordeman, Lilith Fair) had a bunch of TV and Film placements for my music, but eventually was dropped from the label. Since then I have released 5 independent albums and have continued to make a name for myself as an honest and soul-searching singer/songwriter.

What can you tell us about your new album 'Wounds to Scars' and the inspiration behind the songs?

Wounds to Scars is my latest (and probably final) release. I recorded it in Nashville with producer Charlie Peacock. It's piano driven and probably the "coolest" record I've ever put out. By that I mean, the songs (chord progressions and lyrical content) is really vibey and unique. The songs were inspired by various circumstances in my life. As a singer/songwriter, all pain and suffering is just fuel for our creative fires.

Your debut album, Jordon's Sister (1999) was a huge success - how did that album come about?

I performed a song I had written for offertory at our church when I was 16 years old. The guitar player in the worship band was named Ron Aniello, he thought my song was good and so he set up a meeting with a friend of his who worked at a record label. Through a series of events, that is ultimately how I ended up signing with Capitol records. Ron produced my first album and it was truly a dream come true for me.

Since parting ways with a record label after your debut album, you've been releasing albums independently. How have you found that? Does the freedom outweigh the extra workload?

I have mixed feelings about being an independent artist. Some days I love the freedom it gives me, and other days I just get lonely having to be the sole inspiration for everything. I don't have a manager, or booking agent, or label or anything! And that's not for lack of trying! I have had to learn a skill set that does not come natural to me, organization! As an artist that's not our strong-suit. But I'm grateful for the lessons that the independent road has taught me.

Do you think the Christian music scene has changed since you started?

You know, I'm not really involved in the "Christian Music Scene" so I'm not sure that I could answer this question with any authority. I suppose it has, simply because when I started there were about 10 Christian Superstars. Amy Grant, Michael W. Smith, Steven Curtis Chapman, DC Talk and a couple others. Now there are so many bands and artists, I truly can't keep up. So it's changed in that way, but I think that's a good change.

It's a pretty reactionary process. Meaning, an event happens in my life, or someone says something to me, or an interesting idea occurs to me and then in reaction to that, I write a song. I think of myself as a story teller, singing about the events of my world and the emotional process I have in response to them.

Which do you prefer, playing live or recording albums?

No brainer... LIVE! I can say with great confidence now (6 albums down) I do not like the studio. I am not a gear-head or perfectionist. I am an extrovert who likes the challenge of 'the moment'- will I be witty, charming, articulate when I need to be? When it's over-rehearsed I get bored. When we aim for perfection I always feel like some spark is lost. But that's just me!

Aside from playing music you have also written some books. How did you get into that and will you be writing more in the future?

I have written a couple of books for young girls about self-esteem, and that's a real passion of my heart. I actually have a few manuscripts that haven't been published or even looked at by anyone. I think it's all part and parcel of the creative mind, writing songs and books, though they are very different expressions of that creativity, they flow from the same source.

What achievement in your career so far are you most proud of?

Hmmmm.... now you've got me thinking. I think that I'm most proud of how long I've been hacking away at it. The fact that I have not given up despite many rejections and many unfulfilled dreams. I am proud that I've stuck around, or like Rocky says, "I'm still standing, I'm still strong!". In the end, I am grateful that my friends and "fans" have been inspired by my humble musical offerings, and that they've kept me afloat with their support! So keep buying those records!!! Haha.

You’re stuck on an island, it's hot, you only have enough battery life left to listen to one song on your mp3 player. What track is it?

TOTALLY UNFAIR QUESTION. Absolutely unanswerable. But I will give you a toss-up... cause I just can't narrow it down.

U2 - Grace
Billy Joel - Piano Man
Bonnie Raitt - I can't make you love me
Rich Mullins - Land of my Sojourn
Sarah McLachlan - The whole 'Fumbling Toward Ecstasy' Album
Jeff Buckley - Hallelujah
Sheryl Crow - I Shall Believe
Stevie Wonder - Signed Sealed Delivered
Harry Connick Jr. - It had to be you (1st dance at my wedding)

What does the next year hold for Kendall Payne?
Babies!!!

Find out more at: kendallpayne.com

Independent Los Angeles based singer/songwriter Kendall Payne is returning from a hiatus with new music. She has self-recorded what she describes as "a deeply personal and very meaningful song", titled 'Can't Feel You Anymore'…