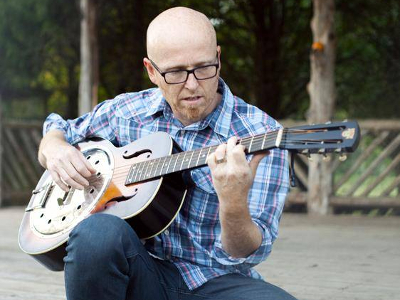 Stu G is a guitarist, songwriter, producer and author. Stu is best known as the guitarist for the British band Delirious?, who, for nearly two decades, penned many of the best known worship songs in modern Christendom. He was also a member of the distinguished CompassionArt songwriters collective, which also boasted heavy-hitters Paul Baloche, Darlene Zschech, Steven Curtis Chapman, and Israel Houghton.


Like countless wannabe rockstars, Stu G’s journey as a professional musician began in his bedroom, learning songs of his favorite bands - Queen, Rush, The Police, and Led Zeppelin. After studying at London’s Guitar Institute, he formed the Stuart David band, lighting up the London club scene in the late 80’s, before rebranding himself as The Treasure Park. Stu quickly emerged as a sought-after session guitarist, which eventually led him to a young Martin Smith, who was leading worship at youth outreach called “Cutting Edge”. The band changed its name to Delirious?, and after seventeen years and several world tours, they singlehandedly reinvented church music and the Christian entertainment-meets-worship experience.

Stu was also a member of One Sonic Society, with Jason Ingram and Paul Mabury, whose single “Forever Reign” has been a mainstay on the CCLI chart and Christian radio. In 2014, Stu recorded and released his first solo project Of Burdens, Birds, and Stars, citing musical influences as Radiohead, U2, Smashing Pumpkins, Manic Street Preachers, Nick Cave, Blonde Redhead and Elbow. When not touring with Michael W. Smith, Stu is writing, recording, speaking, leading worship and working with JHS on a custom line of guitar pedals.


Stu lives in Nashville with his wife Karen, and is always discovering new ways to express the truths he holds on to. “People are my energy and inspiration. It’s in people that I see why creation was such a good idea.” Stu independently released 'Have You Heard 2015' on Stugiology Music through The Fuel Music distribution. This completely remastered, 20th anniversary edition of the album first recorded in 1995 pre-dates Stu’s work with Delirious? and features every member of the original Delirious? lineup.


In 2017 Stu released the multi-artist Beatitudes album, featuring 18 all new tracks from multiple GRAMMY and Dove Award Winners such as Hillsong United and Matt Maher. The full Beatitudes album is part of The Beatitudes Project, which is also a book, Words From The Hill (An Invitation to the Unexpected) from NavPress, and a documentary film, View From the Hill. The project is the culmination of GRAMMY-nominated, Dove Award-winning musician, producer and author Stu Garrard’s 15-year excavation of these “blessings at the bottom of life.”